Trekking on the Island of Beauty 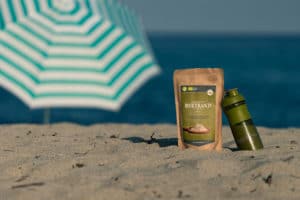 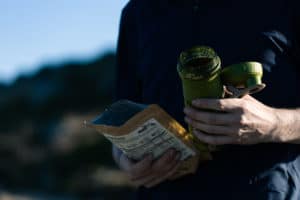 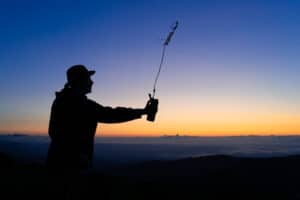 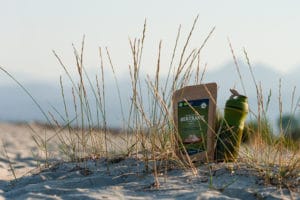 Keeping up with our blog series on trekking, now comes a travelogue of 13 scouts who flew to Corsica for 12 days to master a part of Europe’s “Hardest Hiking Trail.” Corvin tells us about small mishaps, a breathtaking landscape, why BERTRAND in their pack was a good idea and, above all, a lot of fun:

13 scouts, 12 days and the southern route of the GR20 in Corsica. For this year’s summer trip we had chosen a special trek: part of the “hardest hiking trail in Europe”.

Our arrival
From Germany we started early in the morning to Genoa, Italy by bus. Once there, we could already see the big ferries in the harbor, one of which would take us to the island. So we boarded the ship in the evening, and ferried across to Bastia overnight.

We didn’t arrive there at 7 o’clock as planned, but with a delay of about one and a half hours, so we had to hurry to reach our connecting train that would take us to the starting point of our route. (Incidentally, there was also a short sprint to the closest gas station – not the one right on the harbor, which of course had closed – to fill up gas for our stove).
In the end, everything went smoothly and soon we were sitting in an older, rattling train towards Vizzavona. On the three-hour trip we got our first chances to enjoy the diverse landscape of Corsica: First, we drove through ever-higher forests, passed one valley after the next, past sloping mountain slopes and old railway stations, through ever-smaller villages and even past some ibexes.
Right on time for our arrival at the starting point in Vizzavona a heavy downpour set in, and after we were driven away by the innkeeper on whose terrace we had taken cover, we ran off through the pouring rain. Fortunately, it stopped in the afternoon and was replaced by a strong wind, which nearly blew us over on a hill with our big backpacks. All this didn’t cloud our good mood at finally being out on the road again, and so we slowly got used to the heavy backpacks and made good progress.
Unfortunately we didn’t make it to the planned stop for this stage, the Capanelle Lodge, because of the delays on arrival, so we were very lucky that a hermit provided us with his guest hut and we could spend the night there. (Generally it isn’t uncommon for scouts to just look for a place to sleep outdoors, but in Corsica there is a ban on dispersed camping and so we were very happy to have found this alternative.) 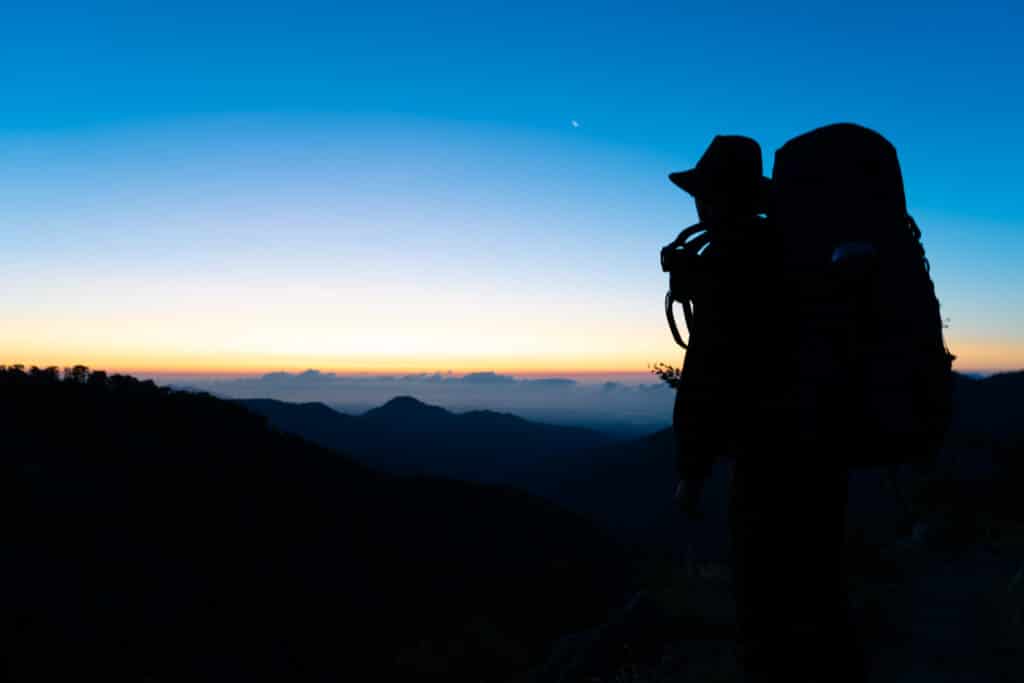 Our start and our nourishment on hikes
The next morning we were already up with the sunrise and looked forward to one of the highlights of our trek: breakfast! On previous tours we had used powdered baby mush as a high-energy but easy food source, but this is only really edible if it’s mixed with muesli, raisins or large amounts of cinnamon and sugar.
That changed this year because we had Bertrand in all flavors! Further extended with two spoonfuls of milk powder, everyone mixed Bertrand and water in their shaker and, as you would expect, all were thrilled to have a delicious and hearty breakfast. Although we drank only normal portions, there were a few who had to save part of it for later because they were already full. Well-fortified for the day, on we went.

The accident
The euphoria of the morning, however, only lasted about an hour, because after crossing a rapid stream, we had a wet and injured participant who had fallen into the water with his backpack. So we split their pack up among the rest of us and limped slowly to the Capanelle Lodge. We reached it early in the morning, but because of the accident we decided to leave off for the day and set up our camp. We spent the rest of the day comfortably, some went to a nearby summit and the rest laid in the sun, played guitar or cards or allowed themselves to recover from the scare with a pizza on the terrace of the lodge.
After consultation with the group and our injured member, we decided to continue our trek as planned the next day. As soon as the sun went down, it quickly got cold and the strong wind drove us into our sleeping bags early. 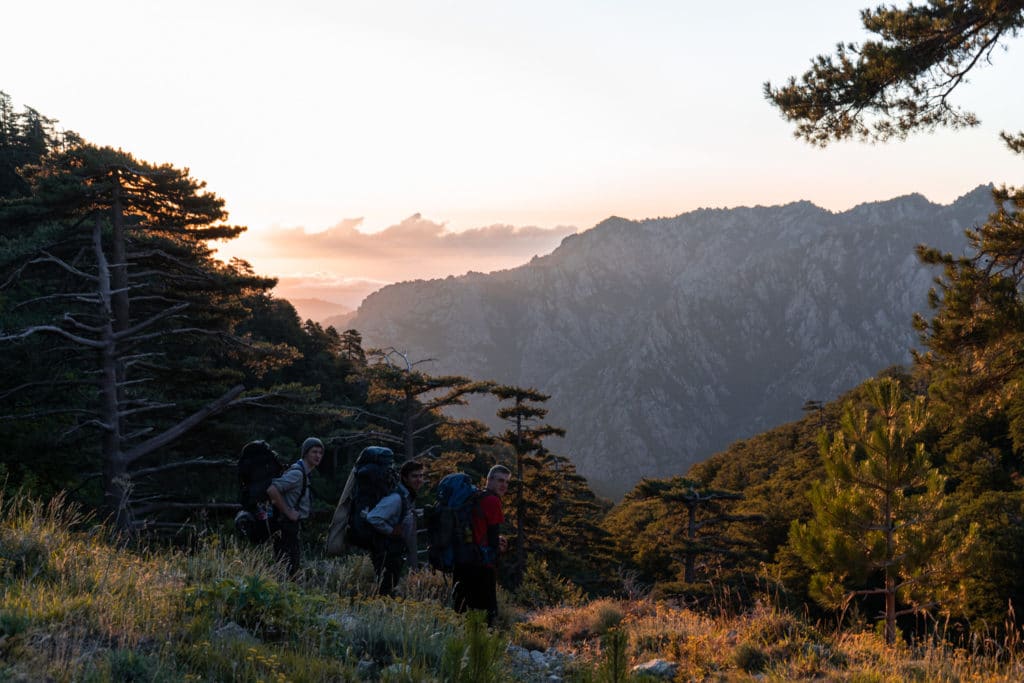 Our alternate route
The next morning we got up at 4:30, because we expected a strenuous stretch with a total of almost 900 meters elevation gain. We had already filled our shakers with Bertrand and milk powder the night before and so everyone just had to add water and we were able to start hiking right away. Getting up early was rewarded by a beautiful sunrise, which we kept seeing on the horizon through the trees . In addition, it was already so warm that you could walk comfortably in a T-shirt – a premonition of the heat that would follow at noon. The way took us over beautiful paths through forests and past streams. Later, we found ourselves on another plateau, only to descend shortly after into the next valley. As so often during this tour, we realized how incredibly diverse and beautiful the Corsican landscape is. 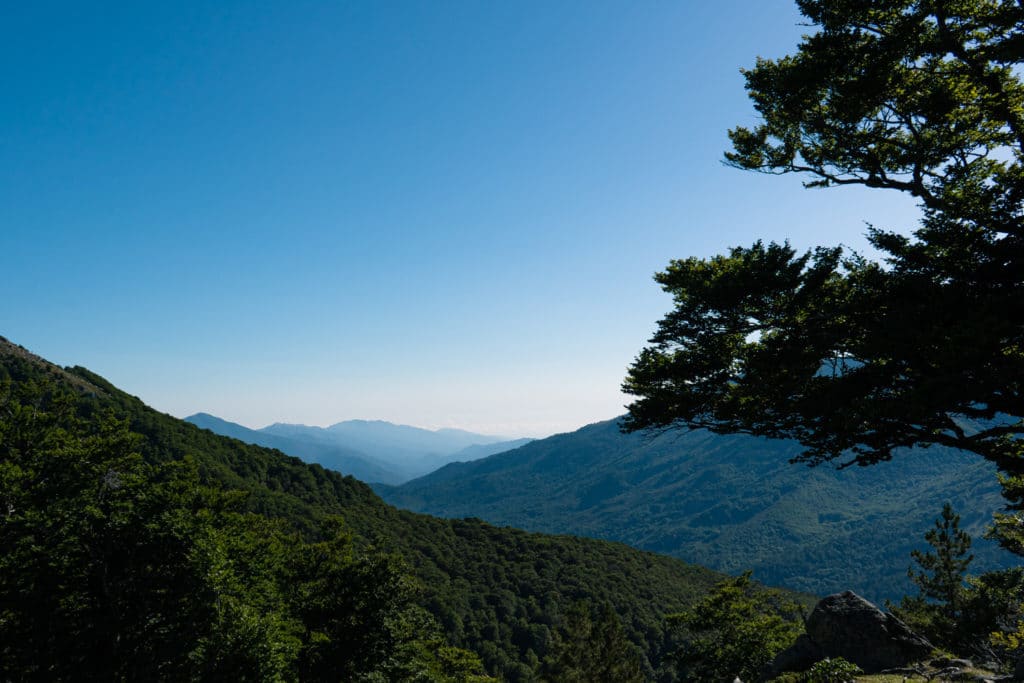 After a long lunch break (more than anything to escape the burning sun), we set off on the last and longest climb of today’s stage, up to the de Prati
Lodge. The ascent was long and exhausting, but the view from the top was unique and made us forget all the effort.

This evening we decided not to commit to the GR20 because of our injured participant, because the next day would be an even more demanding
ridge tour, which involved too much further risk of injury. This decision was difficult and somewhat disappointing, but as a group, of course we stand for the weaker, and so we chose an alternative route. 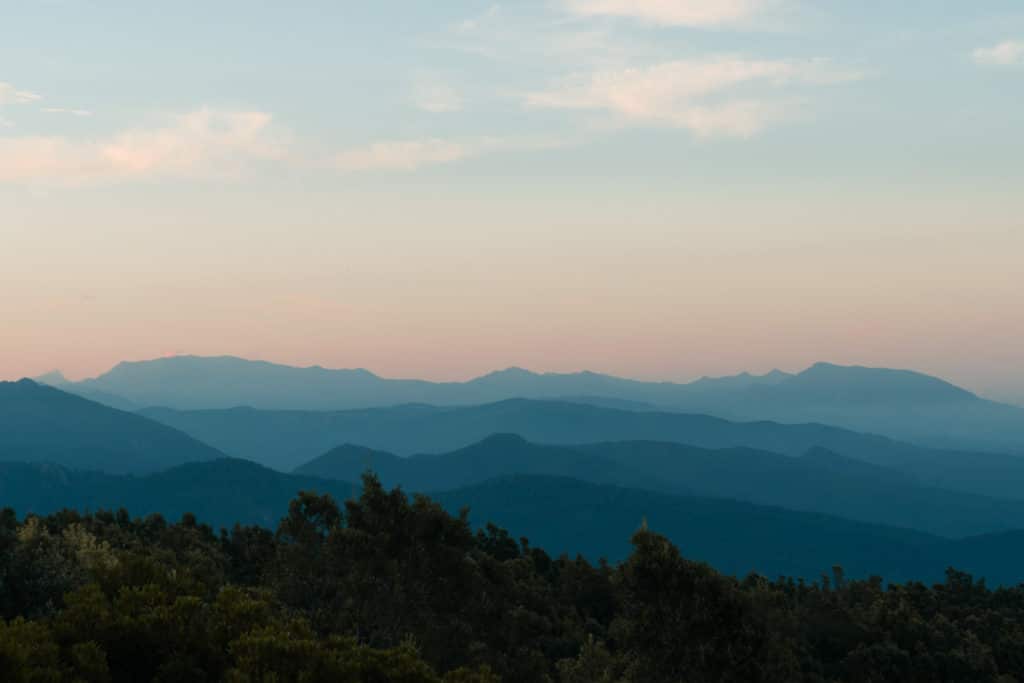 Over the following three days we made our way to the sea by a different path. The route was also part of the “Mare a Mare” trail that connects the western and the eastern coast of Corsica. The landscape was no less beautiful and varied than before and the deeper we went, the more we wandered through isolated mountain villages, and along with civilization, the heat also increased steadily. 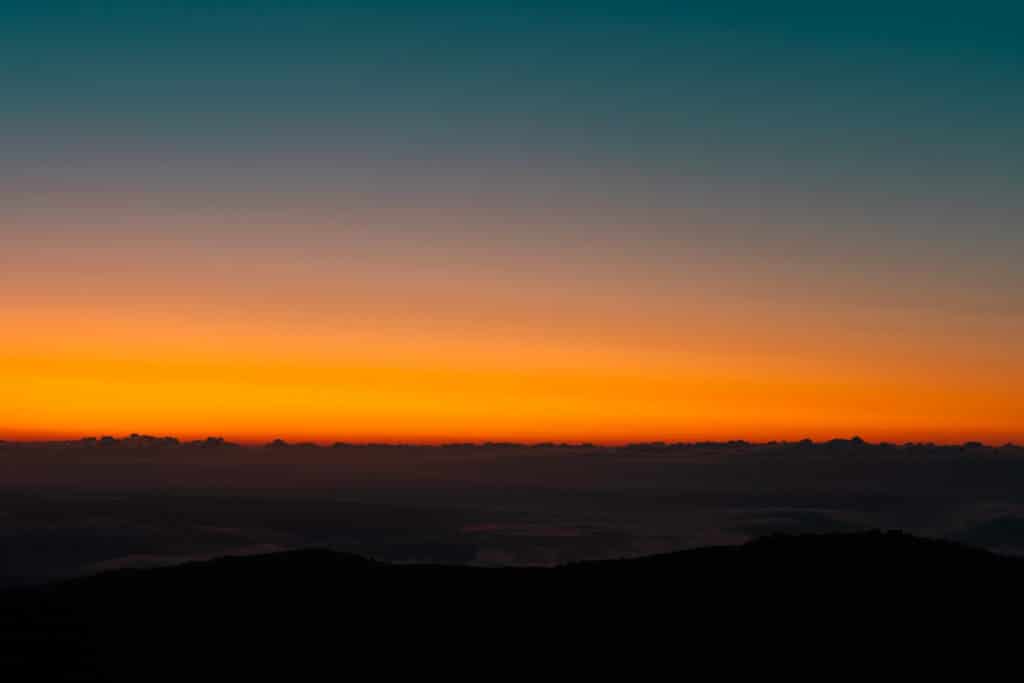 On the way we discovered a refreshing bathing spot on a big brook, climbed into old cars, which apparently the Corsicans simply left in the forest to the rust when they were done with them, and of course also marveled at the well-known bullet holes in the street signs. We asked for our sleeping spots from very helpful Corsicans, as the lodges marked on the map turned out to be accommodations that only had a few rooms (and of course we wanted to spend the night outdoors). Finally we reached a campsite where we spent the last three days of our ride a bit more relaxed with beach walks, beach volleyball, market visits and most of all a lot of community.

Conclusion of our trekking tour with BERTRAND
Overall, we had a very nice and varied trip. In any case, the GR20 will not have seen me for the last time and I would recommend this trek to anyone who has some hiking experience and likes to hike where it’s a bit warmer. (Nevertheless, think about wind and rain clothes!)
Corsica is not called “the Isle of Beauty” in vain, and again and again one finds oneself amazed at the different landscapes, the breathtaking views toward the sea, which goes right to the horizon, and the numerous mountains and valleys that follow one another seamlessly. 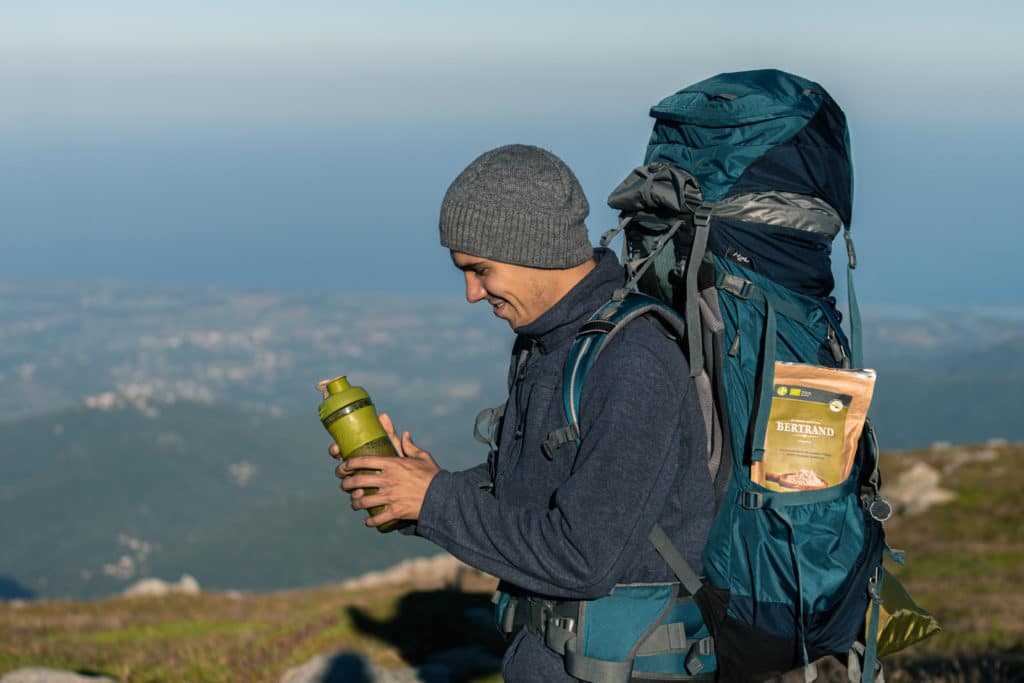 Bertrand was a real asset to our provisions on the journey. The portions are very rich (so much so that next time we’ll be thinking of planning with four servings per pack), the packages are handy because they’re easy to reclose, and the sturdy shaker can also be used as a water bottle. Preparation is simple and fast and with the equally easy to transport milk powder, the same enjoyment as at home. With the varied flavors there was something for everyone, and each variety was praised by somebody or other as a favorite.
On behalf of my group, I thank you for the support and wish you always Good Path!

Corvin and the Patagonians

Thank you, Corvin, for providing us with an exciting travel guide. We wish you and the other scouts many beautiful walks and of course always Good Path!
corsica, scout

Jason Hunt from the channel Campcraft put our product on his tree stump and gave it a detailed examination from an experienced outdoorsman. He gives it a very positive review. Watch the video here.