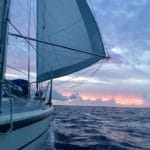 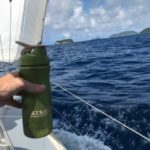 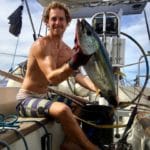 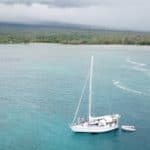 Spend a few months on the high seas. Get away from everyday life and gather new impressions. Who hasn't dreamed of that? Lasse and his girlfriend made their dream come true and were so kind as to tell us a little bit about their adventure!

Lasse, tell us a little something about yourself: who are you, what do you do?
Nordic youth who could never be far from the water. I'm 32 and I've worked for 5 years in Hamburg in the wind industry. In order to further explore this "wind" and be closer to the sea than we were in Hamburg, my girlfriend and I decided to sail the South Pacific for 9 months.

How did you come up with the idea of the sailing trip?
A long trip around the world had long been an idea of mine and my girlfriend's, and since I sail and do all kinds of water sports lately, a sailing trip was an obvious choice. When my girlfriend fell in love with sailing over two summer holidays, the only question was where to go, not how.

Where all is it going to take you?
Since we "only" have 9 months, we chose the most beautiful sailing area in the world, the South Pacific. We bought the boat in Tahiti, from there we went through most of the Society Islands to Suwarrow and Samoa. From Samoa to Fiji where we're now planning the next destination. What is certain is that we will continue to New Zealand at the end of October before the hurricane season starts.

What was your most beautiful experience so far?
It's really hard to say with so many new impressions. In addition to the great underwater world and indescribable islands, probably the impressions from the night sailing. Far away from any civilization in the middle of the Pacific with up to 5000 meters of depth under the keel and fluorescent water all around it.

What was the worst?
That will definitely be the end of the trip ;). Otherwise, a low pressure area (storm) which surprised us with over 50 knots between Samoa and Fiji. Several boats we heard of were badly hit. In contrast, our "Käpt’n Balu" and her crew (Inga and I) weathered the storm with no damage but with a shock and breathtaking impressions.

What role does BERTRAND play for you as nutrition for sailing tours?
Especially on long passages, which can last up to 10 days, it can be impossible to cook anything with so much wind. There's a full meal, which can easily be prepared even in heavy seas, very precious. Baked apple is my favorite kind.

What would you give other people as a travel tip who want to experience such an adventure?
Push through and don't just dream about it. We found so many ads during the boat search from people who have waited too long until health or other life choices have intervened. Many have spent too long and intensively studying the plan and informing themselves until they became too afraid of such a journey. Of course, a certain amount of preparation is necessary to start safely on such a sailing trip, but a lot of it goes by the motto "learning by doing".

We thank Lasse for his willingness to give this short interview and wish him and Inga a lot of fun on their trip!
Pacific, sailing trip

Guido Hartmann is a firefighter and also a big fan of running. But not in practical running clothes: in full…